With the short, dark and cold days, comes a desire for warm comforting foods, and what’s warmer and more comforting than a bowl of soup? There’s a reason the phrase “chicken soup for the soul” exists, and there’s even good reason it’s known as “Jewish penicillin”. For example chicken soup has been shown to inhibit the movement of neutrophils (one type of immune cell) thus reducing symptoms of upper respiratory tract infections.  It may also  improve muco-ciliary clearance, (which essentially is a defence mechanism to stop pathogens from reaching the lungs), due to the amino acid L-cysteine which thins mucus. Finally, when you use homemade broth, you get the benefits of collagen and gelatin which are great for all sorts of things, including gut health and reducing inflammation.

Chicken soup is further enhanced with the addition of lots of fresh garlic, ginger and shiitake mushrooms! Ginger is wonderful for all sorts of things including viral infections , as is garlic. Adding the garlic raw at the end is even more potent. Lastly, shiitake mushrooms are also great for the immune system possibly due to their anti-inflammatory effect. In fact, most mushrooms have medicinal properties.

While it’s nice to know from the studies above and the thousands of years of anecdotal evidence that chicken soup is a great remedy for colds, I mainly just like it because it’s delicious!

To make the soup, you start with a base of homemade chicken stock, which is really simple; you don’t really need a recipe. Just put a bunch of organic chicken bones (from a roast chicken) into a pot with filtered water, a chopped carrot or two, a few stalks of chopped celery and a bay leaf. Simmer for a few hours. Done! It’s important to use organic pastured chicken and organic/pesticide free vegetables for the most nourishing dish.

When the stock is cold, it should gel like rubber or..well…jelly! That’s how you know you’ve extracted a good amount of gelatin – see the picture below! You should be able to scoop it.

For the soup, simple chop a bunch of shiitake mushrooms, greens, ginger and garlic and simmer in the stock until cooked, finally adding salt to taste. 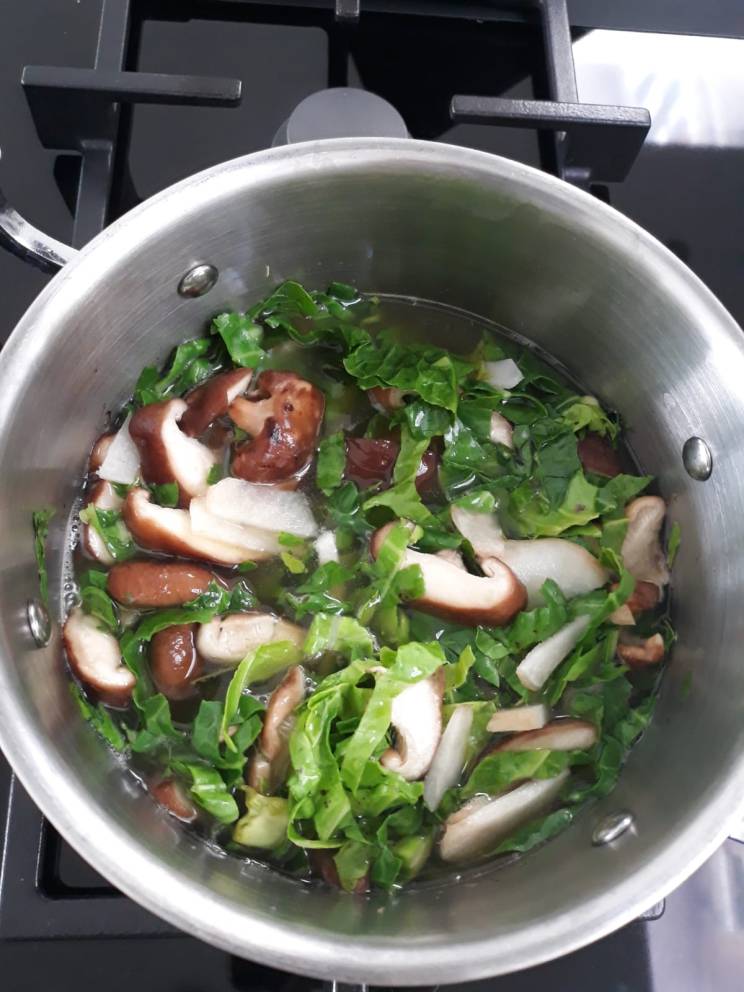 There ya go…delicious nourishing soup! 🙂

Went for a beautiful nature walk in sunny Richmond Park with @creature_from_d_rainbow_lagoon for lovely chats and fresh air! Only 8 degrees Celsius, and just a stone throw's away from conjested london city. :). I'm really grateful to be enjoying nature even though it's winter. It's SO important for general calmness and health. Always great finding new gems where I live, too :) #nature #london #richmond sunshine #wintersun #health #calm #friends #socialising #love #biohacker #primal
Dayum. Everything Rumi writes is beautiful and potent and ethereal. A gentle reminder to take a step back and see the bigger picture #rumi #poetry #wise #life #dream #reality #personalgrowth #biohacking #wellbeing
*New blog post* on why it's important to do some kind of muscle/strength training. Hint = the benefits far exceed body composition and the ability to lift heavy things. See link in profile or copy/paste this link: https://modernprimal.wordpress.com/2019/12/01/the-importance-of-building-muscle/ #muscle #strength #weightlifting #primal #paleo #biohacking #biohacker #strongwoman #ripped #exercise #longevity #healthyaging
Throwback to sunny #Portugal. The 4pm sunsets and overcast days have been a downer here in the Uk, but the last couple of days were sunny and I managed to spend some time in the garden today getting some natural light which boosted my mood. It might be cold, and we might not be making much vitamin D at the moment, but exposure to natural daylight is still super important right now to feel good. Or just go to somewhere warm and sunny 😋 #sunshine #naturallight #health #wellness #biohacker #travel
Mmmmm, check out my super purple blueberry compote. I like to mix wild blueberries (less sweet and higher in polyphenol content) with regular organic blueberries and cook them with gelatin/collagen. Vitamin C (high in blueberries) is necessary for collagen formation. So this is a healthy dessert that's good for your joints/skin/nails! #blueberries #wild #organic #gelatin.#collagen #paleo #primal #healthy #polyphenols #biohacking #dessert
Resting heart rate goals 😃😊 #heart #hearthealth #fitness #cardiovascular #healthgoals
%d bloggers like this: